WINDSOR, NS — When Scott Geddes closed his restaurant amid the global pandemic, he knew it wasn’t the end of the line for Cocoa pesto.

Fast forward nearly two years and he has relaunched the restaurant, welcoming customers to its new location and new look.

“I would honestly say the best part is getting back to our regulars and seeing the faces and just them coming in and enjoying a meal. It’s great because you really haven’t seen people in two years,” said Geddes, seated at one of six available tables. 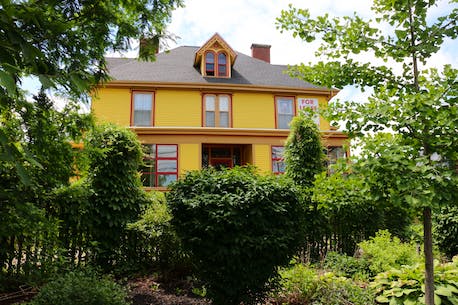 Geddes and Marilyn MacKay, who are co-owners of the business, made the difficult decision to lay off staff and suspend operations on March 15, 2020, just as the provincial government imposed restrictions on the size of group gatherings and limited all non-essential travel.

On June 19, after 14 years of operating the restaurant and Woodshire Inn at 494 King Street in Windsor, they officially closed the business. However, the restaurant side remained intact, albeit dormant, until restrictions were eased and demand picked up in 2021.

In October, Geddes began work on his new restaurant.

If you are going to:

On May 12, 2022, Geddes welcomed guests to the new and improved Cocoa Pesto Food Shoppe, located on the outskirts of Windsor.

The restaurant is modern yet welcoming, intimate yet social.

“My biggest thing with food has always been that we are artisan food. We make our food from scratch. … It is not processed; it’s not a frozen product,” Geddes said.

“The quality of the food is the same as what we did before, but we serve it in a more relaxed environment.”

His eyes light up with excitement as he talks about the work he’s put into the new location. Much like his menu and the meals that are served, he basically built it from the ground up.

“I really wanted to have an open concept kitchen,” Geddes said.

“I wanted it to have a kind of more laid-back feel than what we had before.”

The heavy wooden beams that separate the dining room from the open plan kitchen were salvaged from an old Windsor house on Albert Street that was demolished years ago.

The kitchen and spacious storage and catering areas have been designed by Geddes to maximize functionality and staff comfort.

“After 40 years in the restaurant business, I was successful and built a kitchen which on Saturday night when it was 27 degrees outside our kitchen was 21 degrees. It doesn’t happen,” Geddes said.

“Our old kitchen, if it was 27 degrees outside it probably would have been 35 or 36 in the kitchen. So having the kitchen you can work in and you don’t feel like you’re going to pass out from a knock heat in the middle of the day, it’s fantastic.

He also installed an electric elevator, allowing employees to easily move heavy items, like 50-pound sacks of potatoes, from the ground floor warehouse to the upstairs kitchen.

According to Chef Kelly Taylor, it’s these thoughtful upgrades that really make a difference.

Taylor worked at Cocoa Pesto for two years before the pandemic shutdown and worked with Geddes on the restaurant side of the business when it resumed.

“I do such variety that it’s always evolving…so I don’t get tired of doing the same thing over and over again,” Taylor said.

Geddes said the new restaurant, which was once tucked away in a house dating back to the 1850s, is much more energy efficient than before and is much less formal – noting that people can wear jeans and a t-shirt and not not feel out of place.

“We used to have a restaurant that had a kitchen and this time around we have a kitchen with a dining room, I guess that’s the best way to describe it,” Geddes said. “You are really part of everything that happens here.”

Taylor said she enjoyed working in this open-plan environment and noted that it was also interesting for diners.

“It’s nice to be able to see the interaction in the kitchen as well. It interests some people, to see how things are really going behind the scenes.”

She describes the restaurant as a “comfortable and relaxed place” to dine.

Geddes’ enthusiasm for the possibilities of Cocoa Pesto Food Shoppe is infectious. He comes alive as he describes his vision for his restaurant and catering business.

But, the biggest hurdle Cocoa Pesto is facing right now — aside from the rising cost of food — is the lack of trained staff.

Geddes has been actively recruiting for a month and said he has struggled to find people.

“I don’t know where everyone went,” Geddes said.

“It’s not about salary; it’s not about the quality of the work environment. There just aren’t the people there,” he said, adding that he was paying above minimum wage and, as staff members reached their targets and proved their abilities, he granted salary increases.

“I’ve spoken to a variety of people in my industry; I talked to people outside of my industry. I don’t know what the jobs deficit is right now, but I can’t think of a business in this community that has all the staff right now,” he said.

It currently has five employees but wants to hire 22 more, mostly full-time. This would allow him to begin implementing the full Cocoa Pesto vision.

Currently, the restaurant is open from 5 p.m. to 9 p.m. on select nights, on a 10-day schedule that is posted online and at the door. He said it was not an ideal situation, but necessary at the moment.

“The other thing we’re doing is we’re just communicating with every person that comes in to say ‘please check before you come.’ That’s the best we can do right now,” Geddes said.

“I’ve always kind of operated with the attitude that if we can’t do it 100%, we’re not doing it, and right now… with catering and with the restaurant, that’s the only way what we can do until we have a lot more staff.

The catering side of the business continues to thrive, with events scheduled through the fall, but with limited staff, he worries.

“The worst thing we can do too is burn out the people we have, so we have to protect that as well.”

He likens the May opening to the first phase of a multi-year plan. He eventually wants to offer lunch, offer take-out and online delivery options, and launch the “grocery” aspect of the restaurant.

“This concept that we’re sort of working on here is that we have a small dining room and then we have a whole ready-to-eat food area – so salads, sandwiches, baked goods,” said said Geddes.

“On different nights of the week we will be offering different hot meals that will be ready to go,” he added, noting that one night could be roast chicken. Customers could then select all the fixings they want and take the hot meal home to enjoy.

Like other elements of the restaurant, the launch of the grocery store is dependent on staff being hired and trained.

“It really depends on the staff because all the components needed to do that are already built into the operation.”

The second phase would see the expansion of the catering facilities – increasing the capacity of 24 people by at least three times.

He has already secured the extra space and plotted what it will look like.

Geddes said the location is conveniently located off Highway 101 and he hopes to take advantage of visitors coming to the area to visit Ski Martock, On Tree Fun and Adventure Park and the cabin country.

“I think the road traffic here is eight or 10 times what we had in the other place,” Geddes said.