Oceandiva London: the first CO2 neutral venue on the water in the UK

Octavia A. Dorr May 4, 2022 Catering stitches Comments Off on Oceandiva London: the first CO2 neutral venue on the water in the UK 23 Views

“WWhy travel to the place, when the place can come to you? asks Greg Lawson, CEO of Smart Group, during a recent press briefing for the launch of Oceandiva London.

Gathered on the 42nd floor of the Leadenhall Building, venue representatives and members of the events industry overlook stunning views of the River Thames, where in just a few months the ship will be in use for the first time, accommodating up to 1 500 standing guests and 600 seated places for exhibitions.

After six years of planning and a joint investment of over £25million, the vessel, developed by Smart Group and Amsterdam-based company Oceandiva, will be the largest floating event space on the river measuring 86m in length and 17 m wide, spanning three decks.

Described as the UK’s first CO2 neutral site on the River Thames, the 2,625m² vessel will also be used for events including conferences, receptions, gala dinners, product and brand launches activations.

When launched in the autumn, it will welcome guests from London Bridge, Tower Bridge, Canary Wharf, Greenwich and ExCeL London, with the possibility of using more capital destinations in the future.

“Oceandiva is leading the way to a net zero future for the events industry,” Lawson says.

“The project is the first of its kind in the world and what better place to launch it than the global city of London.

“The journey began with the ambition to create a versatile event venue on the River Thames – and having listened to stakeholders reflect on and adapt to the challenges of the modern age, sustainability must be at the heart of everything we do. do.

“I strongly believe that Oceandiva London will be the catalyst to develop the green future.”

Speaking of the ship sustainable credentials and how Smart Group aims to become net zero by 2030, the company’s Managing Director, Chloe Jackson, says: “It will be powered by 100% renewable energy, relying on green electricity dock-based fast charging. This is further supported by onboard solar panels and a backup biofuel generator for any longer excursions.

“We installed an advanced Airflow heat recovery on-board cooling system, which is regulated with the temperature of the River Thames and results in a 60% power reduction.

“We intend to work with clients to help them make informed choices about their events and how best to balance their carbon emissions.”

Jackson adds, “Our chefs are already using the most local and seasonal produce on their menu and we will continue to reduce food miles where possible and ensure that guests make informed, well-informed decisions about their food choices. menu.”

Working with industry body Isla, Oceandiva London will reduce its carbon footprint for every onboard event by tracking and measuring from the planning phase through to event execution. Smart Group will also work with longtime production partners Encore, who Jackson says share the company’s desire to “make every event as sustainable as possible from the start.”

Tom Ring, Director of Production Venues at Encore, said: “We have invested over £1 million in permanently installed production equipment to deliver high impact events with a low impact on the environment. We install 130 lights to provide peak production for awards shows and celebrations, 28 speakers to provide a sound system around the ship to ensure sound is in the areas that matter most, and 54 m² of ultra-high resolution LED screen to provide a stunning backdrop. 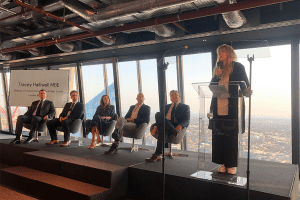 Designed, built and owned by Oceandiva, which was founded by Edwin Petersen in 2003 in the Netherlands, the vessel will be the first London venture outside mainland Europe by the group already established in Germany, the Netherlands and Belgium.

Oceandiva London’s trading company will be owned, managed and operated by Smart Group, which owns Evolution London and organizes sporting and cultural events such as Royal Ascot Village and Lord’s.

As part of the Anglo-Dutch partnership, the ship will be supplied by Smart Group’s own catering brand, Moving Venue, which operates in more than 50 venues, including the historic Royal Palaces and the Natural History Museum. Moving Venue will work in partnership with catering company Last Supper, recently acquired by Smart Group.

Tracey Halliwell, Director of Tourism, Conventions and Major Events at London & Partners, says: “Meeting planners are always on the lookout for something new, unique, unusual – and more, they are looking for something green. Our hope is that Oceandiva can tick all of these boxes.

Oceandiva CEO Edwin Petersen adds: “Our plan is to create a new market on the river which will help London maintain its position as Europe’s leading event city..”